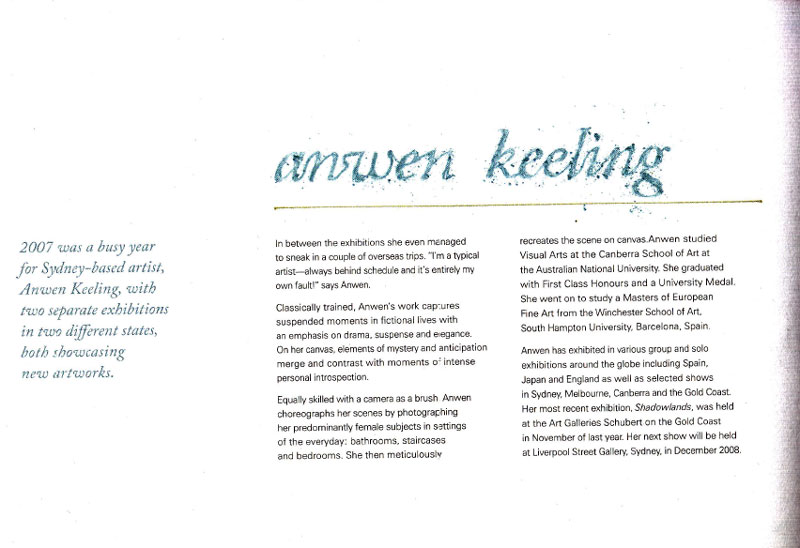 In between the exhibitions she even managed to sneak in a couple of overseas trips. “I’m a typical artist—always behind schedule and it’s entirely my own fault!” says Anwen.

Classically trained, Anwen’s work captures suspended moments in fictional lives with an emphasis on drama, suspense and elegance.On her canvas, elements of mystery and anticipation merge and contrast with moments of intense personal introspection.

Equally skilled with a camera as a brush, Anwen choreographs her scenes by photographing her predominantly female subjects in settings of the everyday: bathrooms, staircases and bedrooms. She then meticulously recreates the scene on canvas.Anwen studied Visual Arts at the Canberra School of Art at the Australian National University. She graduated with First Class Honours and a University Medal. She went on to study a Masters of European Fine Art from the Winchester School of Art, South Hampton University, Barcelona, Spain.

Anwen has exhibited in various group and solo exhibitions around the globe including Spain, Japan and England as well as selected shows in Sydney, Melbourne, Canberra and the Gold Coast. Her most recent exhibition, Shadowlands, was held at the Art Galleries Schubert on the Gold Coast in November of last year. Her next show will be held at Liverpool Street Gallery, Sydney, in December 2008.

Why did you choose to study in Canberra?

I went straight from school to uni and a major factor in my choice was the course at the Canberra School of Art – ANU was still four years, while the Sydney unis had all just shortened their courses to three years. When I went to visit the school of Art, it was so chilled out and I was really impressed by the standard of work. There was a very relaxed and unpretentious feel to the campus and I figured moving to another city was a good way of moving out of home—not that my parents have been anything but supportive, but there was no need for them to witness the activities of a first year art student!

Are the moments you capture and the scenes you paint from your own experiences or are they purely fictional?

The moments are fictional, but there is always a certain level of truth in them—we all have moments of introspection. The atmospheric use of light and shadow is a defining element in my work—I think it creates a sense of mystery where questions linger. The women in my paintings are lost in some deep world and snippets of information lead into a narrative that only the viewer can unravel.

Do you ever find yourself watching the lives of those you don’t know and creating stories around what you’ve witnessed?

I think we are all voyeurs. I don’t find myself creating stories, as such. I am more intrigued by moments, such as the fall of light on someone’s collarbone, or the tilt of a head, a gesture or the fall of shadows. I leave it up to others to tell the stories. In some ways my paintings are like a single page from a book, enough detail to understand a character and their environment. It’s up to you to be the author and decide the beginning and ending—most people tend to project their own experiences and emotions onto the work.

Culture-wise, has there been any trend or movement that’s captured your attention recently?

When it comes to art, I like to keep abreast of current practices; I recently went over for the Venice Biennale and Art Basel. It was a fantastic opportunity to see what’s happening on a worldwide scale, and to try and work out my position within that. A standout for me at the Venice biennale was the knockout quasi-abstract paintings by that old magician-artist Sigmar Polke.

Nearby were some amazing new Gerhardt Richter paintings and some lovely Robert Ryman paintings. I guess I’m a tad old school with my own obsession for paint; I’m an easy target for beautiful surfaces and being able to witness an artist’s exploration of paint and its versatility.

I spend a fortune buying books on art and film on the internet and I now have a great reference library. I find endless inspiration in the work of painters such as Carravaggio, Vermeer, Edward Hopper, Eric Fischl, Lucian Freud, and photographers Jeff Wall and Bill Henson. Film, both old and contemporary, also informs my work. Hitchcock has been a long standing favourite, because of the simplicity and strength of the framing of his scenes and the use of the single light source. Some of my closest friends are also talented artists and their working practice and artistic achievements keep me on my toes!

In Australia, it sometimes feels like art is approached as a luxury activity—as a status game for those who want to class up their wealth. Do you think the way people approach art in Australia is changing?

I think Australia has a long way to go with accepting and understanding contemporary art practice. It seems to me there is more respect and an acceptance of artists and their role in society by the general population in Europe. Earning a living as an artist is quite a challenge and many artists require additional jobs to maintain their practice. I am extremely lucky that there seems to be a market for my work and I like to think people buy my paintings due to their aesthetic qualities rather than as status symbols! Unfortunately in Australia, we need the media circus around such things as the Archibald Prize to stimulate attention on current practitioners.

You’ve been quoted as saying, “I see beauty in the everyday”. How do you seek out and capture that beauty? Do you carry a camera with you or keep a journal to keep you inspired?

Beauty is such a difficult concept to quantify as it is so subjective. I don’t carry a camera everywhere—my ability to drop and lose things doesn’t aid my camera’s life span! I guess I make mental notes and occasionally write something down if I think I am unlikely to remember.

Your subjects are predominantly female and it’s obvious you see beauty in the female form, are you ever tempted to paint more males?

I do occasionally paint boys—but they tend to pose more than the girls! Also, I understand what goes on in a girls head far more than I do a boys! I have always been interested in the portrayal of women by men, the objectification and the male gaze. I like to think that the women in my paintings are subjects rather than objects. Although beautiful and often sensual, they have a sense of self; often it is the viewer intruding on their space and territory rather than the subject waiting for the viewers gaze.

Given that many of your paintings are so intimate and contemplative; is it tough to persuade models to bare all when they sit for you?

Bribery works a treat! The gift of a lovely slip or a new set of bra and knickers seems to work well, along with a glass of wine to relax! My friends are all very beautiful and patient girls. Because they are friends, they are more able to be at ease for me, which is so important as it adds to the degree of realism. For example, when I paint a girl in the bath, she needs to be able to relax and almost pretend I am not there, so that the resulting pose is as natural as possible.

‘Daybreak’ appears to show a woman waking up, struggling to face the day ahead. She is trying to find the beauty in the complexity of the outside world but can’t see past her internal sadness. Are we way off?

Not too far off – but I like to think the strong blue sky and the bright sunlight add a little glimmer of hope—she can’t be too unhappy with spotted pink knickers on!

Aside from your art, what gets you out of bed in the morning?

I’ve turned into a morning person these days, and Pluto, my large spotted Dalmatian, generally makes sure I am up and about to take him to the park most mornings. I also compete in equestrian circles – low levels – as I tend to fall off a fair bit! I do three day eventing, so a good gallop around the trails at Terrey Hills (where I keep my horse) cheers me up no end!

If you were to paint yourself in one of your stories, what would you be doing?

I quite fancy doing a tongue-in-cheek equestrian portrait of myself – but I guess, I can see a part of myself in all the figures.

Which human emotion do you find the most fascinating?

At the end of the day, what do you hope people will take away from your art?

A sense of quietness and stillness from our otherwise hectic existences.