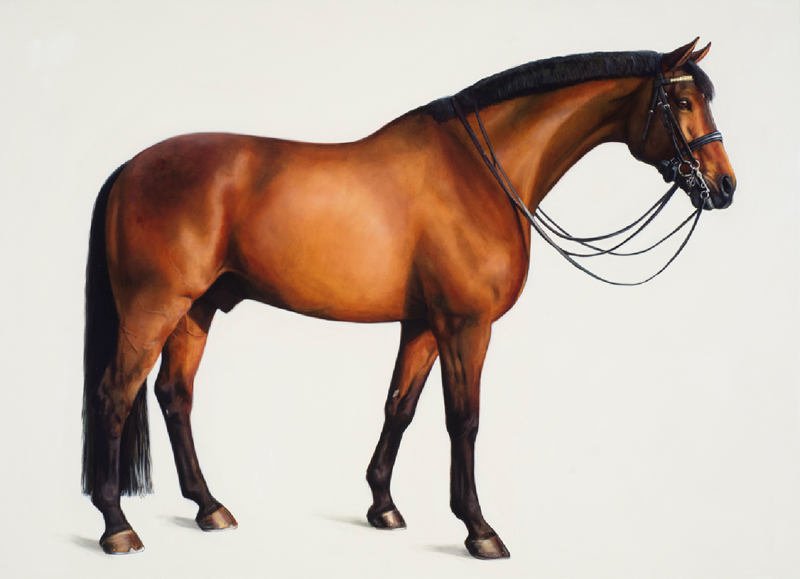 Liverpool Street Gallery is pleased to announce Anwen Keeling’s upcoming solo exhibition of new paintings. The exhibition will be on view from 16 July – 11 August 2011, and will open on Thursday 21 July, 6-8pm.

Anwen Keeling is an accomplished technician and colourist known for her genre of realist paintings. Her oeuvre has included portraits of people and animals, seductive paintings of semi-clad, female figures in intimate interiors to dynamic, film-noir depictions of couples in intense, private moments. In 2011 Keeling was commissioned by the University of Notre Dame to paint its Chancellery – His Eminence Cardinal Pell, the Honourable John Howard and the Vice Chancellor Emeritus Professor Peter Tannock.

In an exciting new shift, Sport Horse will comprise a suite of paintings based on the historical tradition of 19th Century European equine painting, evocative of the work of artists such as George Stubbs and Alfred Munnings. Keeling is a keen horse rider and has competed in various Equestrian sports, stating, “It seemed natural, given my passion, to want to paint horses.” For this exhibition, Keeling reveals her painterly skills in a series of large-scale portraits of elite Australian Sporthorses depicting a variety of breeds including Thoroughbreds, Warmbloods and Lusitanos. Victory Salute (2011) (right) is the name of the majestic Warmblood gelding, one of Australia’s elite dressage horses. Victory Salute competes on an international level with his rider Brett Parberry (Australia’s highest FEI ranked dressage rider worldwide) and in 2010 represented Australia at the World Equestrian Games in Kentucky, USA. The paintings are reminiscent of George Stubbs’ famous painting, Whistlejacket, which features a half-rearing chestnut stallion set against an olive green background. Keeling chose to paint Victory Salute because, “he is a wonderful example of the modern Sporthorse: great bone structure, an athletic frame, strong movement and paces.”

Working largely from photographs and sketches, Keeling takes a methodical approach to painting, paying meticulous attention to detail, light and form. In both the paintings illustrated above, Keeling truthfully depicts form through the use of linear perspective, tight composition, real colour and exquisite tonality. Her decision to leave the backgrounds bare serves to, “accentuate and heighten the differences between the various horses portrayed, revealing how humans have adapted their anatomy to different sporting disciplines.” Despite the almost photo-realist quality to the works, Keeling never denies the artist’s hand – the brushwork and thin layering of oil and varnish still remain visible elements on the surface.

Born in Sydney in 1976, Anwen Keeling completed a Bachelor of Fine Arts (First Class Honours) at ANU, Canberra and was awarded the University Medal. She also holds a Masters of European Fine Art from the Winchester School of Art, South Hampton University, Barcelona, Spain. She has exhibited in Japan, Spain and England as well as in Sydney, Melbourne, Canberra and the Gold Coast. Keeling was a finalist in the Sulman Prize at AGNSW in 2010, and again recently in 2011. Her paintings have been selected for The Year in Art (2003) and Salon des Refuses (2004) at the SH Ervin Gallery, National Trust, Sydney. Keeling’s portrait of the Sydney radio personalities Merrick Watts and Tim Ross (‘Merrick and Rosso’) was exhibited in the Doug Moran National Portrait Prize (2004) at the State Library of New South Wales. In 2007 she was awarded the ABN AMRO Emerging Artist (Employee’s Choice) Award for her painting, Marnie. Keeling’s work is represented in the collections of the National Australia Bank and the Australian National University, Canberra as well as private collections in Australia, United States, Hong Kong and the United Kingdom. Anwen Keeling lives and works in Sydney.